My recent visit to Oxford to see the exhibition of Tolkien: Maker of Middle-earth was a revelation to me and full of inspiration. 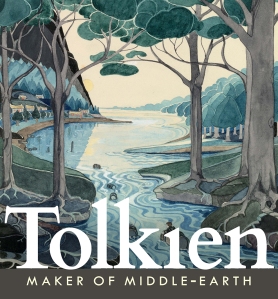 You may find the exhibition in the  ST Lee Gallery, Weston Library, next to Blackwell’s Bookshop on Broad Street. It’s packed with fascinating objects and letters, and drawings: Tolkien’s own exquisite illustrations for The Hobbit and  The Lord of the Rings, plenty of original letters giving intriguing biographical information about him, authentic items and furnishings from his own home, a magnificent  projection of a 3D model of the map of Middle-earth and many other  delights for all those who love Tolkien and the fantasy world which flowered from his creative genius.

I love The Hobbit, The Lord of the Rings, and The Silmarillion: I first came to The Lord of the Rings when I was at university in Lancaster; and for many of us then it was a cult book; the world of Middle-earth so absorbed us that Tolkien’s characters, and situations from Frodo and Sam’s epic journey, would appear in our conversations without any need for explanation or context. Over the years I have been moved and enchanted by the  powerful illustrations of places in Middle-earth such as Rivendell, but until I came to this exhibition in Oxford I confess I had no idea that Tolkien was himself such a gifted artist and had actually himself drawn and hand-coloured much of the artwork with which I have been captivated.

These are just a few of the many gems I discovered from the exhibition:

Tolkien spent twelve years writing The Lord of the Rings, in order to provide his publisher George Allen & Unwin with “something more about hobbits” as a sequel to The Hobbit – his publishers were hoping for a lucrative series like Swallows and Amazons

He squeezed that writing into his evenings, after full days spent on academic work in his role as English professor at the University, family life, and socialising, etc.

The words In a hole in the ground there lived a hobbit…. came to him while he was doing some marking of student papers, and he scrawled those words in an empty space on a paper he was marking. He did nothing with that idea for several years, it just lay in his mind, waiting its time (just like the ring itself lay waiting…)

The village near Birmingham where he lived as a young child inspired him for Hobbiton.

He kept having wonderful ideas for additions to The Lord of the Rings, such as an exquisitely-rendered facsimile of a seriously war-damaged and bloodstained ancient manuscript, and a fascinating epilogue, a letter from Aragorn to Sam Gangee years after the events of The Lord of the Rings, but his publishers would decide against incorporating them for various reasons including because they thought it cost too much…

After the Tolkien exhibition we spent a considerable amount of time in Blackwell’s, losing ourselves among the special Harry Potter displays and Tolkien and CS Lewis sections not to mention among the pages of the Paddington Bear London pop-up book…

Then we enjoyed a fascinating tour of the Oxford Colleges, as you’ll see from some of the photos here. 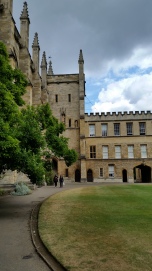 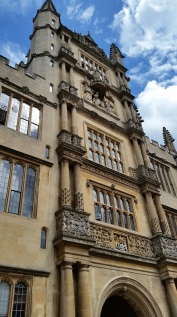 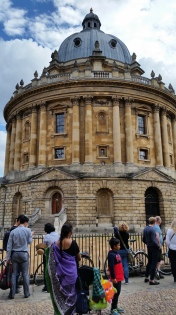 Oxford is the city of dreaming spires and has a rich and complex history,  a tapestry of darkness and light, which perhaps suggests just a few reasons why it is also, for creative people, a city of lightbulb moments…

I'm a writer of psychological, paranormal and mystery fiction and non-fiction. My latest book, 'Paranormal Warwickshire', was published by Amberley Publishing in November 2020. Find all my published books here: https://amzn.to/2UktQ6x View all posts by SC Skillman

2 thoughts on “Inspiration from JRR Tolkien in Oxford”