I’ve loved the work of Noel Coward since I first saw one of his comedies, in my teens. 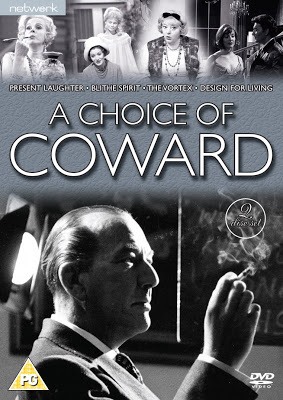 Among many different archetypal character-types which I hold in my mind, is that of an indolent Noel Coward male lead, lounging against a mantelpiece wearing a silk brocade smoking jacket, elegant, mannered, and dispensing witticisms with the greatest of ease: the sort of individual who would instantly impress in a social setting; but what’s really going on behind that stylish, confident exterior? I had this image in mind when I created the character James in my novel Mystical Circles (and James reappears in A Passionate Spirit).

In Coward’s play Present Laughter, the male lead, Gary, a successful comic actor, lives out of the image of himself he projects on stage.

He is the focus of everyone else’s obsession.

Gary is a poser – he throws tantrums, acts in a theatrical manner, and hates it when others accuse him of “over-acting” – which he, of course, does all the time. Only his secretary and his supposedly-estranged wife see him in a plain unvarnished way.

Meanwhile, a strange, intense young aspiring playwright, Mr Maule, is obsessed with him and latches onto him and challenges him.

Gary want to get rid of them all, yet cannot see he himself is a magnet for them.

In this play, we see yet again the beloved Noel Coward tropes:

In this play, the women who spend the night with Gary, and have to explain themselves to visitors in the morning, always:

Just so do so many of us feel compelled to behave in predictable patterns, so that we might as well be following a script that’s been written for us.

It’s comedy, farce, satire … but isn’t it often just like life? Comedy is a wonderful vehicle for communicating truths. Don’t we find sometimes – especially in this society, and on the current political scene – that people behave as if they were characters in a farce, acting out a parody of themselves?

This is the human comedy.  And comedians only need to tweak real life a very little: just a slight exaggeration – for us to see how absurd this all is.

I think this is why, in moments of insight, we instinctively respond to good observational comedy, especially when it is delivered with warmth – for there are occasions when we recognise ourselves reflected back in the wit of the comedian. And when that is so, we might see opportunities to try and interrupt this pre-determined script, and start acting as if we genuinely do have free will, instead of behaving like characters pushed hither and thither by the plot…