The Christian faith rests on the awesome truth of several supernatural events – the Virgin Birth, the Incarnation, the Transfiguration, the Resurrection and the Ascension – and last year, I watched again “The Nativity”, the TV mini series first broadcast by the BBC at Christmas 2010. 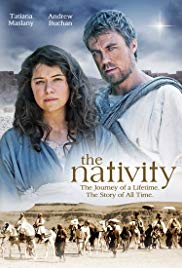 I remember the series had a strong impression on me when I first viewed it and we could hardly wait for each new episode. Seeing it as a continuous story was a different experience from viewing it in episodes;  I found it much more challenging and harrowing, especially the scenes in which Mary is judged and reviled both by her fellow villagers in Nazareth, and by householders and innkeepers in Bethlehem.

Tatiana Masleny and Andrew Buchan both gave brilliant performances as Mary and Joseph  and I must confess John Lynch came over as a very handsome and rugged Gabriel.

Here’s a Youtube link to a beautiful and moving song by Kate Bush with clips from The Nativity film.

Seeing this very realistic re-imagining of the Nativity story again, I realised afresh how divisive the story is, for all those who engage with it, whatever they believe.  To see Mary portrayed like this when she has been so revered by Catholics over the millennia with titles like Queen of Heaven and Mother of God, is certainly very challenging. And it leads me to reflect again on the assertions of Christian theology, most notably the question of how God could have chosen to bring his Son into the world by causing Mary so much suffering … huge issues arise from this, and provide much material for argument and discussion. Once again this brings up the question that many have struggled with, of why Jesus could not be the son of God and also born naturally by Joseph.

I thought this portrayal of the story has the power to strengthen and enhance the faith of the viewer by the honesty and realism of its portrayal. But how you respond does of course  depend on the stance you choose to take before coming to the story.

Certainly I remember the leader of our group at an Alpha course a few years ago beginning the discussion by expressing an inability to believe in the virgin birth.

But in this film version, we see Joseph as key. His ability to wholeheartedly believe what Mary was telling him, saved her from the judgementalism and hatred and rejection of all those around her – which, without the protection of Joseph, may even have resulted in her death before Jesus was even born.

This gives us much to reflect upon.