On the Graham Norton Show which was broadcast on BBC One on Friday 16th April 2016, 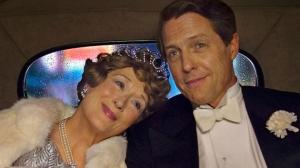 actor Hugh Grant said he took on the role of St Clair Bayfield in the newly-released film Florence Foster Jenkins against his previous intentions, because a) the script was so good and b) because he was attracted by the three dimensional character he was being invited to play – which implies he thinks all his previous characters were one dimensional.

Hugh said that the character he plays, St Clair Bayfield, is “a failed actor” who has chosen to protect Florence (played by the wonderful Meryl Streep) from true self-knowledge because he loves her. In the film, this character goes to extraordinary lengths to collude with Florence’s self-deception, by covering up her lack of ability as a singer and paying off bad reviewers and hiding her from the truth.  In other words he does what seems to be cowardly, morally weak, wrong and even cruel, for complex reasons that are not straightforwardly immoral, and because he is emotionally invested in supporting her and upholding her in the dream she believes in.

I haven’t seen the film yet and so cannot offer a review, but I was fascinated by the point Hugh Grant was making. Many love the characters Hugh has played so far during his film career, but his comments brought me back again to the vital importance of three dimensional characters, not only in persuading major actors to take on film roles, but also in winning success for a novel.

Three dimensional characters in fiction are those whose actions, words, relationships, behaviour and inner life all work together to win our empathy.  Just as the hallmark of a great leader is the ability to win people’s confidence, the sign of a great character in fiction is that we care for them deeply, whether their actions are “good” or “bad” or far less easily defined. Whilst reading a recent novel I was starting to intensely dislike a certain character, when his actions and behaviour were depicted from the viewpoint of someone else. But then the author took me into his viewpoint – and my attitude to him was transformed.

I believe we only need to see and understand someone’s inner life, to feel that empathy for them.

Do share in the comments. Which are your favourite three dimensional characters in fiction, and why?