I had a great time at the Leamington Peace Festival over the weekend, and enjoyed chatting to many interesting people at my local author stall. 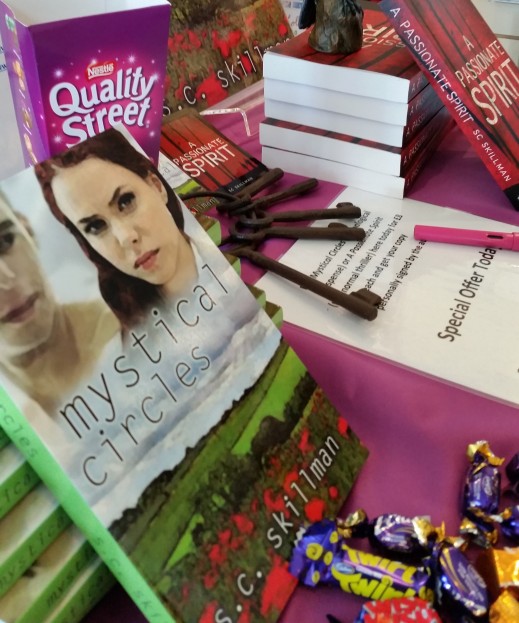 Not only did I sell some books to keen readers, and meet someone who was uncannily like one of my characters in Mystical Circles, who asked me for advice on how to start his own book, but also had a conversation about the paranormal involving a dog and the council and several fast-disappearing residents from a Birmingham house, which gave me ideas for future use in a novel!

I’d love to see you on Friday 24 June 11am to 2pm in Costa Coffee,  Royal Priors, Leamington Spa, where again I’ll be selling signed copies of both novels. Do drop in if you’re in Leamington that day!

Please do join me in Costa Coffee if you’re in the Royal Priors Shopping Centre, Leamington Spa, on Saturday 24th June.

I’ll be there between 11am and 2pm on that day handing out free bookmarks and postcards as well as signing copies of my two thriller / suspense novels Mystical Circles and A Passionate Spirit.

Costa are great supporters of local community projects and that includes local authors! And in common with many others, one of the things I love to do is while away an hour or so in a coffee shop… and Costa features among my favourites.  Even better if you are a writer who is able to while away several hours in a corner with a cup of coffee writing in your A4 lined pad… whether or not that café is in Edinburgh and has a view of the famous castle!

Hope to see you there.