What could be more poignant than a formerly grand mansion, standing on a cliff, now partially demolished, abandoned and desolate?

Gaping staircases you cannot climb; stone balconies you long to stand on to gaze at the view; empty windows you feel sure a shadowy figure should flit past.

Just such a gaunt mansion is Guy’s Cliffe House, our local romantic ruin, perched atop a cliff above the River Avon, catching the imagination of all who pass by on the other side of the river.

Gothic stone tracery, an ornate balcony, evidence of a flambuoyant builder, remain to tantalize you.

For one of those who occupied  the house embellished it with Roman, classical, mediaeval and Gothic elements.

Guy’s Cliffe House  so caught my own imagination during the past few years that I occasionally wished that, if I was hugely wealthy, I could pay for it to be restored to its former glory.

In reality, I’d like it to be made safe for people to enter and explore, and for new timber staircases and walkways to be constructed, so we could climb to those balconies and gaze at the view.

And I’d like all the original formal gardens to be restored so people can wander around in them and enjoy the romantic setting.

I feel that Guy’s Cliffe is a poignant illustration of what happens when wealthy property owners do not successfully pass on their property to an equally rich and prudent and competent heir.

One developer/house-breaker deliberately demolished part of the Guy’s Cliffe House, then all the contents were auctioned off, and and accidental fire and neglect did the rest.

We all find it difficult to understand how such a grand property gets damaged, ransacked and neglected like that.

8 foot tall bamboo now crowds close to the cave in the cliff, where Guy of Warwick, in the tenth century, returned from the Holy Land and mysteriously chose to live for two years, rather than reuniting with his wife and child in the house above.

And next to the house, the lovely chapel of Mary Magdalene contains Guy’s figure in stone, representing him to be 8 ft high.

The formal gardens have vanished, overgrown by tall trees and shrubs and bamboo. 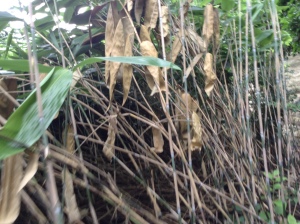 It’s like another world – untouched, just left as it is.

So many windows. You feel somebody should appear in them.

We couldn’t fail to wonder and imagine as we took the guided tour around the house and grounds on 25 August 2013, guided by our host Adrian, with an excellent, fluent and richly informative talk.

If you’re in the area of Warwick then don’t forget to book a guided tour round Guy’s Cliffe after you’ve visited Warwick Castle!