The story of Alice Liddell and the real Lewis Carroll (Charles Dodgson) is one that has inspired so much speculation and analysis since the  creation of Alice in Wonderland in 1862; 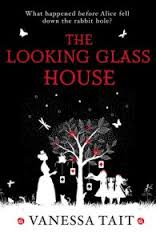 and here is another book on the subject, The Looking Glass House, this time a novel told by Alice’s great granddaughter Vanessa, which draws on family treasures and stories of the ‘original’ Alice. I found it a convincing picture of a stifled Victorian society with characters suffering from Victorian angst (especially Mrs Liddell and Mary Prickett the governess)  along with a very pert, outspoken Alice and an enigmatic but compelling Mr Dodgson (aka Lewis Carroll).

For me, this novel built up a picture of an intense, brilliant young man with a great love for children which never quite tipped over “the edge” (as we would define it today with our 21st century sensibilities), but could easily have done if Victorian restraint had not had such a strong hold on his character. Vanessa Tait’s book depicts the scene in which Mrs Liddell banished Mr Dodgson from the house, thus precipitating the rift between him and the Dean’s family.

Having considered it all I believe that if I had been in Mrs Liddell’s position, I may well have done the same. Alice herself is shown very much as an instigator and provocateur in her relationship with Mr Dodgson. The adult Alice’s silence on the subject throughout the rest of her life is something I could well understand –  as the two Alice books quickly became hugely popular she would have been afraid to tarnish anybody’s vision of the stories by telling the truth about the circumstances in which they were created, which may have been misinterpreted.  Mr Dodgson’s family, too, clearly felt the same, in tearing out of his diary the very pages which cover the time he created the first Alice story.

I was intrigued by the number of Amazon reviewers who gave The Looking Glass House low star ratings and said the book disappointed them, because it was not what they expected. I think they hoped the biographical reality behind it all would fully match up to the enchantment of the stories.  As a writer myself I feel that knowing the biographical reality behind the creation of a story is interesting but in no way defines or encompasses the created story itself. The curious fact is that I identified at different times in the book with Mrs Liddell, Alice, and Mr Dodgson. I admired and enjoyed the pert outspokenness  in Alice which other readers described as brattishness; and felt I could understand Mr Dodgson’s obsessive love for the company of children, and also Mrs Liddell’s fear of allowing the relationship to develop into Alice’s adolescence, and her sudden urge to banish him from the scene.

Above all the book made me feel that as I child I would love to have had a friend like Mr Dodgson because he was the sort of person children love – quirky, entertaining teasing, quixotic, fun, enigmatic.