A couple of years after I left university, whilst on a spiritual search, I went to a lecture at the Royal Overseas League in London, met, chatted to and  became captivated by an inspirational speaker: a Physics professor who wrote spiritual books. His name was Dr Raynor Johnson. 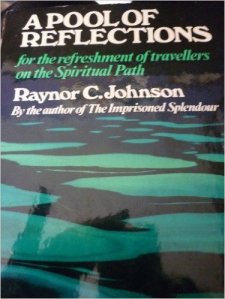 Subsequently I read and loved all his books, beginning with his latest: “A Pool of Reflection”. I later wrote him a letter, to which he responded with a very kind and encouraging reply from his home at Santiniketan, Ferny Creek, Melbourne Australia.

Santiniketan later became notorious as the first premises Raynor Johnson made available for the use of the then beautiful and charismatic  Anne Hamilton-Byrne, the cult leader, and where she gave her spiritual talks, and started to gather her followers.  At the time, of course, I had no knowledge of this.

I wrote about him and about the cult with which his name has now become ineradicably linked in this blog post: The Curious Case of the Kindly Professor and the Cunning Cult Leader. I also used the story of the cult in my novel  A Passionate Spirit (pub. Matador 2015).

This cult is particularly relevant to my interests in writing A Passionate Spirit, because of the way in which the cult leader uses beauty and charisma to win devoted followers, whom she then indoctrinates with her teachings; and the cult preys upon the young and the vulnerable.  In addition the cult won the support of many intellectuals and people occupying high professional positions. It is a case which is of vital fascination to a writer of psychological thrillers and suspense.

Later I was contacted by journalist Chris Johnston, who has published articles about the cult in  The Age, Melbourne and in the Sydney Morning Herald. He wanted to make reference to my experiences, and to quote from my blog post, in a book he was writing about the cult.

You can watch the story of this cult on BBC TV tonight Tuesday 29 November 2016 in a documentary called:  “Storyville: The Cult That Stole Children.” It is being broadcast at 9pm.

M paranormal thriller novel A Passionate Spirit inspired these remarks from a Net Galley reviewer, CE Gray:  “as Natasha and James started to take hold of both the centre, and the people within it, the story picked up pace and for me became a page turner. I needed to know, were there supernatural forces at work? Was Zoe imagining it? Were Natasha and James just fraudsters? Was this a story about a cult?

I was pulled in, hook, line and sinker, picking up my kindle at every opportunity to find out what happened next and the end was not disappointing.

I would absolutely recommend this book to anyone interested in cults, the supernatural and thrillers in general.

What I especially loved were the author’s notes at the end, talking about her inspirations for the novel, including the Australian cult, The Family, which sent me scurrying off to the google for an hour after I’d finished the book. A great read.”

A Passionate Spirit is available to buy online and in bookshops.