The other day I saw an encore screening of George Bernard Shaw’s play “St Joan” from National Theatre Live. 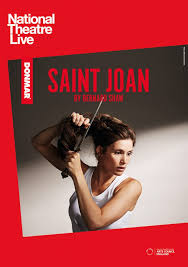 I studied this play at university. Then, as in my recent viewing, I was entranced by the character of Joan herself, and by the words Shaw puts into her mouth.

Joan has  special resonance for me because when I was young, as a member of a children’s choir, I sang in a performance of Honneger’s “Joan of Arc at the Stake” – an oratorio with words by Paul Claudel, a Catholic poet. The performance was at the Royal Albert Hall; Mia Farrow played Joan, and Andre Previn conducted the London Symphony Orchestra. We sang the part of the children of Lorraine.

The character of Joan had a strong impact upon me. I remember several words from “Joan of Arc at the Stake” and they are largely from Joan herself, in which she described her visions and her mystical inspiration, in terms that totally encompassed their reality.

To me the central thing about Joan of Arc was “empowerment”.

Joan was an illiterate peasant girl who claimed she heard a trio of saints speaking to her; and on the basis of this she believed God wanted her to lead the French army to fight and defeat the English, and place Charles II on the throne of France. In 1431, when she was nineteen years old, the English led by the Earl of Warwick tried her on numerous charges, one of which was blasphemy, and sentenced her to be burnt at the stake. The part of the saints were sung by soloists in the music drama; and I felt that Paul Claudel  handled the whole work from the viewpoint that Joan’s experiences were real.  The work has been accused by critics of being several things, including weird, bizarre, sentimental and heavily Roman Catholic, but I loved it, just as I love Elgar’s “The Dream of Gerontius”, another musical work which has in the past had the same accusations levelled against it.

When I reflect upon Joan and the fascination she holds for me, I see her as someone who was marginalised, who had religious experiences which empowered her, and who refused to be controlled by her circumstances:

I think of similar cases of young girls and women who have had profound religious experiences which then impact the future course of their lives and the lives of many others:  Bernadette of Lourdes, St Therese of Lisieux and Julian of Norwich.

Part of the fascination of these individuals to me is that between them they usually demonstrate one of a number of recurring features, which tend to marginalise: these elements include being young, female, poor / of peasant background or illiterate; and suffering from serious illness, whether bodily or mental. Another element that often appears is the gift of healing. There are many other examples, of whom a good proportion have had visions or extraordinary powers of insight, on the basis of which they have gained enormous influence, and have captured the imagination of future generations.

What do you think? Can you offer other examples of young female visionaries who have had a big impact on the world and may have captured your imagination?

I'm a writer of psychological, paranormal and mystery fiction and non-fiction. My latest book, 'Paranormal Warwickshire', was published by Amberley Publishing in November 2020. Find all my published books here: https://amzn.to/2UktQ6x View all posts by SC Skillman