A good example is Julian Clary who is above all a genius with words – playful, teasing, fluid, quixotic, suggestive, subversive – and he has an acute sense of irony. His camp public persona in itself subverts what I believe may lie much deeper in him, which is more subtle and complex, the true person beneath the entertaining mirage.

I’ve long loved camp comedians. They follow on from a line of great gay writers: Evelyn Waugh, Oscar Wilde, Noel Coward, to name just a few that come to mind. There are many examples among gay comedians, but my great favourite first of all was Frankie Howerd. 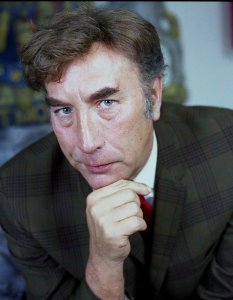 There were others I loved too, Kenneth Williams foremost among them. I instinctively warmed to these entertainers and felt drawn to them. Perhaps it was because they represent, metaphorically, border country, phantoms behind the magic lantern, different dimensions, stories within a story. The man dressed as a woman, the woman dressed as a boy. And in Shakespeare’s time of course, the young boy dressed as a woman.

Whether or not any of them  hid their  true sexuality whilst in the public eye – as was the case with Frankie Howerd – that essential gay character suffused their performances and their personal style; I don’t believe it can fail to do so, in any creative area.

Not long ago, I saw Julian Clary in the role of Slave of the Ring in the pantomime Aladdin at the Birmingham Hippodrome. He shone out above all the other performers.

And my favourite character in the TV series Are You Being Served was played by John Inman.

When I first saw him in this sitcom, I was entranced. Here was an adult man, behaving in the most silly way imaginable, and being loved for it.

I loved him, everything about what he was doing and being and saying, and what he was projecting.  He told me something different about the adult world, and personhood, and what he turned upside down was the rigid compartmentalised view of the world that can so easily crush us in childhood and early teens.