What do you do in a heatwave? We headed for the Cotwolds and one of our favourite places, Broadway Tower. 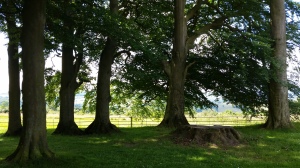 The last time I was there a cold gusty wind and a heavy damp mist greeted us.

But on this visit, the sun blazed out of an azure sky, 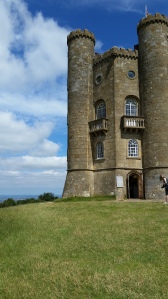 and it was an ideal day to climb the Tower

and view the 16 counties from the top.

I’ve written about Broadway Tower before on this blog as it’s a place of inspiration,

not least because of its association with the preRaphaelites and in particular William Morris, whose philosophy I admire and whose designs I love.

As I wrote in my previous post about Broadway Tower, among all things most romantic to me is a high place.

I go to high places for calmness and peace, and also to reconnect with that sense of perspective we all need so dearly in the world today.

There are a number of high places I love to visit, from where I live in Warwickshire. the nearest are the Burton Dasset Hills; Broadway Tower is about half an hour away; and the Malverns a little further.  But all are sources of inspiration.

What are your favourite places to visit, for inspiration and upliftment of spirits?  I’d love to hear about them, wherever you live… unless of course they are secret locations that you don’t want to be swamped by visitors! Do share in the comments below.

My dream, wrote the designer William Morris, is a dream of what has never been… and therefore, since, the world is alive, and moving yet, my hope is the greater that it one day will be… dreams have before now come about of things so good… we scarcely think of them more than the daylight, though once people had to live without them, without even the hope of them.

William Morris, along with the Pre-Raphaelite brotherhood, and the members of the Arts and Crafts Movement, was one who inherited and took forward all that was good in the Romantic Movement.

Among all things most romantic to me is a high place.

I go to high places for calmness and peace.

There are a number of high places I love to visit, from where I live in Warwickshire.

And just such a place, 35 minutes drive from my home,  is Broadway Tower in the heart of the Cotswolds, which I have visited many times, most  recently the day before writing this post.

From the top of the tower one may see, on a fine day, thirteen counties.

No wonder idealists and romantics  went there in the nineteenth century after their friend took a lease on the Tower, following the death of the Tower’s creator and original owner, the Earl of Coventry. For the Tower, a picturesque folly on the summit of Broadway Hill, emerged from the romantic movement. So, too, flambuoyant, theatrical and sensual, did Painswick Rococo Garden emerge from this tradition, as I wrote in a recent review on Trip Adviser.

William Morris was just one of the many idealists and romantics who came here. His rich, complex and exquisite designs now adorn soft furnishings, and a selection of them may be seen on the second floor of the Tower.

He is a beacon of romantic idealism, combining a love of medieval craftsmanship and Gothic design elements.

And his association with Broadway Tower – together with that of his contemporaries of like mind – is appropriate.

It’s certainly true that I, too,  feel an affinity with the Romantics, the Pre-Raphaelites, the members of the Arts & Craft movement, and their dreams and visions.

For where would we be in this life if none among us aspired to, or dreamed of impossible ideals?

Read the full text of The Dream of William Morris here.