I have long loved wildflower meadows, and thought how lovely it would be to have one instead of a garden. But creating a wildflower meadow isn’t just a matter of buying a few packets of seeds and scattering them over a piece of unwanted lawn. Several years ago I did just that and waited, hoping for a glorious profusion of wildflowers several months later and the result was – nil.

In May 2016 we attended a Plantlife talk at Highgrove, the Prince of Wales’ beautiful garden near Tetbury, Gloucestershire, and came away with two packets of wildflower seeds.

These seeds were a special Highgrove mix – enough for a small patch of wildflower meadow in the garden.

Inspired by the Prince of Wales’ Head Gardener Debs Goodenough we planned to plant just a small area with the seeds.

We now knew that to plant a wildflower meadow in your garden you need poor soil, perhaps an area of “old lawn”, and certainly not lawn or soil which has been fertilised and carefully tended in the past. So we chose a wild area.

Last August my son Jamie (a budding horticulturalist) sowed the seeds in a a patch measuring 4 square metres in our back garden.

We didn’t expect much in the first year; a wildflower meadow may take a few years to become fully established. In fact I must admit I expected that during the first year we’d have just a small  jungle of weeds, and would need to wait and trust that the beauty would emerge in a few years.

But this July we’re delighted to see the wild grasses tall and shining in the sun, and among them, a few of the first wildflowers to appear. 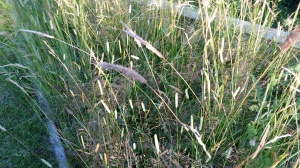 It gives us great pleasure to look out beyond the more “domesticated” beds of rose and lavender, past the newly-sown area of lawn, to our little area of Highgrove wildflower meadow.

It will be mown for the first time in September, and then after that four times a year.

Next year we hope to see a profusion of colours and perhaps a small version of the lovely wildflower meadow at Highgrove!

For more posts from me about wildflowers and Highgrove, click here and here

I’d love to know what you think about wildflower meadows! Have you ever tried to create your own meadow in your garden? And how successful have you been?

One of the loveliest things about England is the sight of our native wildflowers. 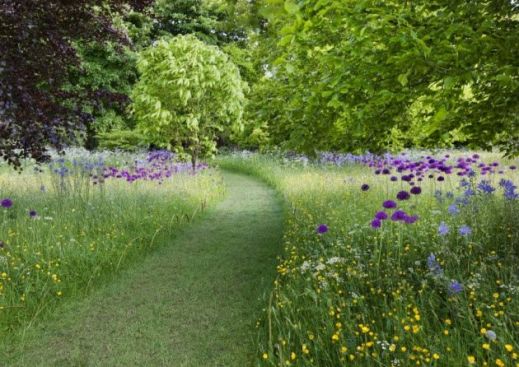 For some it may be possible to take these things for granted, but to me, cow-parsley growing in the hedgerows, and bluebells appearing in unexpected places, is something miraculous – along with the oxeye daisy, the meadow buttercup, viper’s bugloss, red clover, the cowslip and many others exquisite plants and wild grasses. And so I was delighted to visit the Prince of Wales’ garden to Highgrove again last Wednesday, to see his wildflower meadow in its full glory, and to hear a talk on Plantlife.

I first wrote about Highgrove when I visited the garden last August, and then I noted how quirky, playful and imaginative it is.  However the wildflower meadow had been mown and it wasn’t the time of year to appreciate its true beauty. Now, however, we could delight in it as we learned about orchids and buttercups, about crested dogtail and sweet vernal grass.  Afterwards we enjoyed a glass of Pimm’s on the terrace then went into the Prince’s visitor reception centre the Orchard Room, for a delicious meal and a talk from Plantlife about the Coronation Meadows project, which aims to have created 90 wildflower meadows around the UK by the Queen’s 90th birthday. The talk was highly inspirational and by the end I was determined to create a wildflower meadow in a 4 metre square area of our own garden.

Later I was reading the Prince’s book on Highgrove Garden and I was particularly struck by what he says in his foreword. He wrote about the so-far 36-year process of creating a garden like this from scratch (in 1980 when he bought Highgrove there was nothing but extensive grassland with a few trees). Though he was talking about gardening, many of his words related closely to the creative writing process too:

He spoke of “moments of magic… light becoming dreamlike, illuminating intensity” and in such moments when we are “lost in wonder that such beauty is possible, inspiration can come.” It can “easily go wrong if you rush at it,” he wrote; and he advised against “forcing a plan or design.” Instead he believes we must “wait for an intuitive idea to form itself when the moment is right.” In many cases, he observed, it was “several years before the correct setting dawned on me.” He hoped that visitors, whether garden experts or not, would find something here to “inspire, excite, fascinate or soothe.”

Some may regard this view of the creative process rather high-minded; and of course, perfectionism can create its own problems;  and yet I believe there is much truth in these words, and they can be applied across many creative endeavours.

If you’d like to visit Highgrove take a look here for further details.

Drenching rains accompanied our tour round HRH the Prince of Wales’ intriguing garden at Highgrove but with so much to wonder at, we all kept going and completed the tour.

Highgrove Garden made me think of the plot of a children’s book, quirky, fun, playful. At every turn there is a new surprise, like something dreamed up by Lewis Carroll or Edward Lear. It was an odyssey through a quirky and unpredictable environment.

The downpour intensified as we went round, yet everyone was so entranced by the garden, it remained a minor issue – even when we waded through deep puddles on the unmade paths.

Moving through the garden is like progressing from one chapter to another in a beguiling story. If fairies inhabited this garden they would be the wild, anarchic spirits Shakespeare portrays in A Midsummer Night’s Dream. I particularly loved the juxtaposition of wilderness and artistry.  HRH The Prince of Wales has invited artists and sculptors to run wild with their imagination; everywhere you may see the evidence of free expression and creativity.

In summary, this is a unique and profoundly inspiring garden.