I have long loved wildflower meadows, and thought how lovely it would be to have one instead of a garden. But creating a wildflower meadow isn’t just a matter of buying a few packets of seeds and scattering them over a piece of unwanted lawn. Several years ago I did just that and waited, hoping for a glorious profusion of wildflowers several months later and the result was – nil.

In May 2016 we attended a Plantlife talk at Highgrove, the Prince of Wales’ beautiful garden near Tetbury, Gloucestershire, and came away with two packets of wildflower seeds.

These seeds were a special Highgrove mix – enough for a small patch of wildflower meadow in the garden.

Inspired by the Prince of Wales’ Head Gardener Debs Goodenough we planned to plant just a small area with the seeds.

We now knew that to plant a wildflower meadow in your garden you need poor soil, perhaps an area of “old lawn”, and certainly not lawn or soil which has been fertilised and carefully tended in the past. So we chose a wild area. 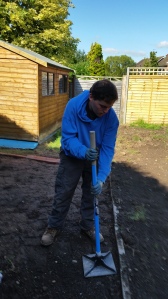 Last August my son Jamie (a budding horticulturalist) sowed the seeds in a a patch measuring 4 square metres in our back garden.

We didn’t expect much in the first year; a wildflower meadow may take a few years to become fully established. In fact I must admit I expected that during the first year we’d have just a small  jungle of weeds, and would need to wait and trust that the beauty would emerge in a few years.

But this July we’re delighted to see the wild grasses tall and shining in the sun, and among them, a few of the first wildflowers to appear.

It gives us great pleasure to look out beyond the more “domesticated” beds of rose and lavender, past the newly-sown area of lawn, to our little area of Highgrove wildflower meadow.

It will be mown for the first time in September, and then after that four times a year.

Next year we hope to see a profusion of colours and perhaps a small version of the lovely wildflower meadow at Highgrove! 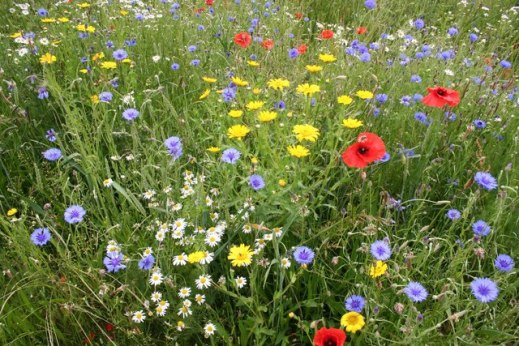 For more posts from me about wildflowers and Highgrove, click here and here

I’d love to know what you think about wildflower meadows! Have you ever tried to create your own meadow in your garden? And how successful have you been?

Last week I visited HRH the Prince of Wales’ garden at Highgrove for the third time.

Each time I’ve visited – the first time in pouring rain in August 2015, the second time near the end of the wildflower season in June 2016, and now in October 2016, we’ve been led by a different guide and each has chosen a different slant. On this occasion our guide (a gentleman in his eighties) told us that HRH the Prince of Wales takes his guides round the garden and tells them all the stories and points out the things he wants them to mention to the visitors. Inevitably, however, each individual will have his or her own angle onto the garden.

So this time I was able to notice not only those aspects of the garden this particular guide was focusing on, but those which carried stories told on my previous two visits. One of the tales told by today’s guide (tongue-in-cheek) portrayed the Prince as an unexpected visitor to Highgrove whose favourite occupation, having turned up without prior warning, is to hide behind the hedge and listen in on what visitors say about his garden.  In fact most of the time the visitors are silent with either admiration, delight, puzzlement, bemusement or even, dare I suggest, indignation, when they realise that they are not in the Land of the Immaculate, and that weeds are not treated like public enemy number one in this garden, 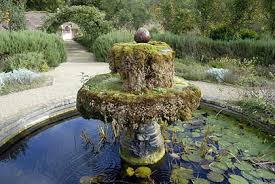 moss is allowed to multiply to its fullest extent on stone, and different principles apply, other than those we might expect, perhaps from National Trust gardens, or those associated with Capability Brown.

This time I felt able to say which are most definitely my favourite aspects of the gardens at Highgrove. For those who have visited, this list will be meaningful, but for those who haven’t, then I suggest either reading this book on the subject, or just letting your imagination play with the images the list suggests:

I love the stumpery, and the little gnome that is to be found inside one of the stumps there;

the temple garden, with its two statues to ward off evil spirits, and the network of dry sticks and twigs in the temple pediments, that manage to look like intricate wood carvings; 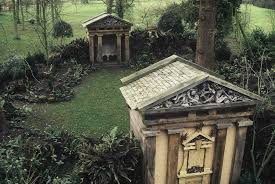 the goddess of the wood;

the wall of gifts; the four daughters of Odessa;

the pond with redundant stonework and limestone topped by gunnera, the topiary frog and snail.

To me, this is a garden that is playful, quirky, eccentric; a fantasy made real by someone who has the means, the time, patience and heart to achieve it. As I wander through the garden, I can’t help expecting trick fountains – such as those which King Ludwig of Bavaria incorporated into his own garden, in the gardens of his dreamlike palace.

END_OF_DOCUMENT_TOKEN_TO_BE_REPLACED

One of the loveliest things about England is the sight of our native wildflowers.

For some it may be possible to take these things for granted, but to me, cow-parsley growing in the hedgerows, and bluebells appearing in unexpected places, is something miraculous – along with the oxeye daisy, the meadow buttercup, viper’s bugloss, red clover, the cowslip and many others exquisite plants and wild grasses. And so I was delighted to visit the Prince of Wales’ garden to Highgrove again last Wednesday, to see his wildflower meadow in its full glory, and to hear a talk on Plantlife.

I first wrote about Highgrove when I visited the garden last August, and then I noted how quirky, playful and imaginative it is.  However the wildflower meadow had been mown and it wasn’t the time of year to appreciate its true beauty. Now, however, we could delight in it as we learned about orchids and buttercups, about crested dogtail and sweet vernal grass.  Afterwards we enjoyed a glass of Pimm’s on the terrace then went into the Prince’s visitor reception centre the Orchard Room, for a delicious meal and a talk from Plantlife about the Coronation Meadows project, which aims to have created 90 wildflower meadows around the UK by the Queen’s 90th birthday. The talk was highly inspirational and by the end I was determined to create a wildflower meadow in a 4 metre square area of our own garden.

Later I was reading the Prince’s book on Highgrove Garden and I was particularly struck by what he says in his foreword. He wrote about the so-far 36-year process of creating a garden like this from scratch (in 1980 when he bought Highgrove there was nothing but extensive grassland with a few trees). Though he was talking about gardening, many of his words related closely to the creative writing process too:

He spoke of “moments of magic… light becoming dreamlike, illuminating intensity” and in such moments when we are “lost in wonder that such beauty is possible, inspiration can come.” It can “easily go wrong if you rush at it,” he wrote; and he advised against “forcing a plan or design.” Instead he believes we must “wait for an intuitive idea to form itself when the moment is right.” In many cases, he observed, it was “several years before the correct setting dawned on me.” He hoped that visitors, whether garden experts or not, would find something here to “inspire, excite, fascinate or soothe.”

Some may regard this view of the creative process rather high-minded; and of course, perfectionism can create its own problems;  and yet I believe there is much truth in these words, and they can be applied across many creative endeavours.

If you’d like to visit Highgrove take a look here for further details.

Isn’t it lovely how many different moods and themes can be captured by garden designers and landscape architects?

A week ago I was speaking to the guide who led our tour around Highgrove Gardens about how HRH The Prince of Wales viewed Capability Brown. And the answer was that he realises in some contexts the ideas of that great eighteenth century garden designer might be appropriate, but personally it’s not his “sort of thing”. For when Capability Brown was brought in to transform the surroundings of a stately home, he would be thinking of sweeping lawns flowing seamlessly into the extensive parklands via the ha-ha, dotted with majestic parkland trees, and would of course throw in a cunningly-situated lake, which would create a perfect vista from the house.  This is a profoundly different  approach to that of the sequence of interconnected rooms full of  quirky and unexpected things, which is itself a very popular style of garden design among the great gardeners (such as Vita Sackville West with Sissinghurst Castle Garden, of course).

And again I thought how calming and uplifting it is to be in this spacious parkland, which wraps around the house perfectly, providing an ideal setting.

But there’s now a new feature in the landscape, of which HRH the Prince of Wales would wholeheartedly approve: a new wildflower meadow on the West Lawn, with mown paths running through it corresponding to a William Morris design, relating directly to the theme of the excellent Arts and Crafts exhibition currently showing inside the house.

As we visited it on the last day of August the wildflowers were long past their best; apart from a single patch which gave some idea of what the entire meadow will look like next May:

Drenching rains accompanied our tour round HRH the Prince of Wales’ intriguing garden at Highgrove but with so much to wonder at, we all kept going and completed the tour.

Highgrove Garden made me think of the plot of a children’s book, quirky, fun, playful. At every turn there is a new surprise, like something dreamed up by Lewis Carroll or Edward Lear. It was an odyssey through a quirky and unpredictable environment.

The downpour intensified as we went round, yet everyone was so entranced by the garden, it remained a minor issue – even when we waded through deep puddles on the unmade paths.

Moving through the garden is like progressing from one chapter to another in a beguiling story. If fairies inhabited this garden they would be the wild, anarchic spirits Shakespeare portrays in A Midsummer Night’s Dream. I particularly loved the juxtaposition of wilderness and artistry.  HRH The Prince of Wales has invited artists and sculptors to run wild with their imagination; everywhere you may see the evidence of free expression and creativity.

In summary, this is a unique and profoundly inspiring garden.