This is the sixth in a series of short reflections on places in Cornwall.

There will be few words, and mainly images.

Truro is a fascinating city and in particular the cathedral is a beguiling gothic style edifice constructed in Victorian times. We attended Evensong there which was a meditative, calming experience, standing in the choirstalls behind the choir and listening to the interweaving of their lovely voices.

Whilst in Truro, we also visited the Shelterbox Visitor Centre, not shown here, which I can thoroughly recommend. An experiential presentation of all that can be provided for people who have suffered tragedy and lost their homes in man-made or natural disasters – do visit the Centre if you are ever in Truro.

My next book ‘Paranormal Warwickshire’ will be published on 15th June 2020 by Amberley Publishing.

The UK Games Expo had not been on my radar until Richard Denning one of the Games Expo directors and a historical and fantasy novelist, kindly offered me space on the Authors Stand in the Birmingham NEC during the weekend Friday 2 – Sunday 4 June 2017.

So there I was for three days, sharing a stand in a huge venue with some very popular and successful authors, as I displayed and sold copies of my three books, Mystical Circles, A Passionate Spirit and Perilous Path.

This was a fabulous opportunity. The gaming world is one that I haven’t paid too much attention to in the past, but the whole weekend was a revelation. The atmosphere was vibrant; colourful characters and a dazzling variety of games and gaming accessories abounded, all contributing to the fun and good humour which was evident among the exhibitors and visitors.

I met and learned from other authors on the stand:

I also met Ian Livingstone, fantasy author and entrepreneur, and co-founder of the Fighting Fantasy series of gamebooks.

He came to do a signing and long queues formed as his fans flocked to the stand to have their books signed and to chat to him. 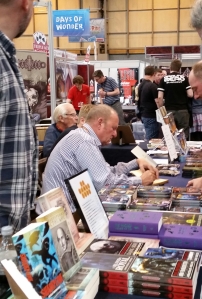 I had the chance to exchange ideas and learn better ways to promote myself as an author, and there was a great sense of camaraderie among all those exhibiting their books on the stand.

Meanwhile, many cosplay enthusiasts strolled past in wonderful costumes. 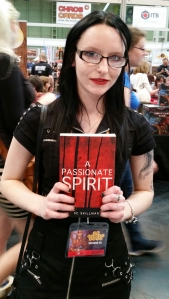 Transformation was the name of the game as so many took on the personnas of multifarious game characters and archetypes.

We also had a photo opportunity with a Dalek, who passed by the Authors stand and demanded, “What is A Passionate Spirit?”

The gaming world is one in which a vast number of “tropes”  flourish: adventure, quests, danger, violence, fantasy, history, steampunk, sci fi…

I gained some new insights into how my own WIP is indeed using some of the gaming tropes, for instance, the predicament of the main protagonist as she finds herself in a deadly situation from which she must escape – hidden chambers and secret passageways and dark rooms all find their place in my novel, and these elements are very popular in the gaming world.

Also the Gothic genre – which I now work within – has a close relationship with the gaming world. So there was an unexpected connection for me, together with the fact that I’m using paranormal and supernatural elements more and more in my fiction, and also would like to move more into fantasy in the future.

Perhaps I have inspired you to try the UK Games Expo yourself next year!